The History of Utoro

History of Utoro with Pictures 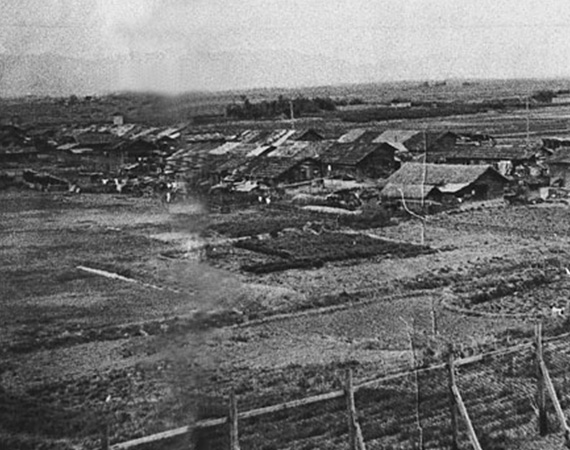 How the Utoro District Was Formed

51 Utoro, Iseda-Cho, Uji City, Kyoto. This address belongs to all households of a small district of ethnic Koreans, called Utoro. Utoro began as the living quarters for ethnic Koreans, or Zainichi Chosenjin, mobilized for the “Kyoto Military Airport Construction Project” promoted by the Japanese Government beginning in 1940.

During the wartime, Koreans came to Utoro to engage in backbreaking airport construction work, trying to avoid a draft and poverty. When the construction work suddenly came to an end as Japan lost the war, Korean workers were simply abandoned like waste in the place where they had worked and lived.

After WWII ended, many Koreans wished to go back to their homeland; however, Japan’s long-time colonial rule on the Korean Peninsula not only destroyed its infrastructure, but also brought social and political chaos. Those who could afford to return home were limited in what they could take with them by law. As a result, a large number of Koreans ended up staying in Japan.

Utoro was no exception. Korean workers and their families, without knowing where to go or how to make a living, stayed. They managed to put down their roots in Utoro by clearing wasteland, raising families, and helping each other to make Utoro as their home. 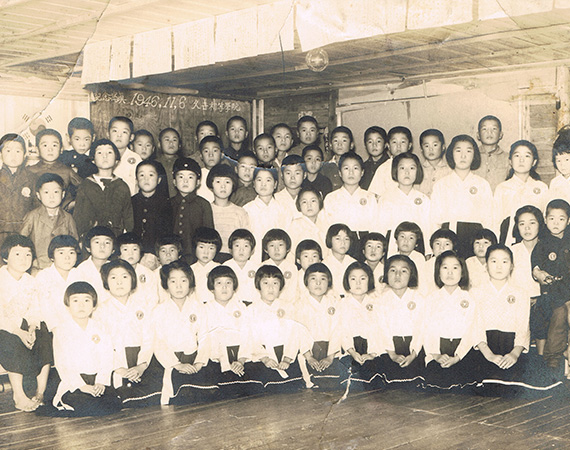 Life in Utoro After War

Japan’s defeat in the Pacific War in 1945 meant liberation from colonial rule for the Koreans in Utoro, but it also meant falling into a period of persistent unemployment. With poverty and severe societal discrimination against Koreans in Japan, the people of Utoro did anything possible to make a living and to feed their families.

In spite of the hardships, one of the first things they started after the war was a “Chouren Kuze Branch School” of Korean Ethnic School in September, 1945. It was to learn their own language and culture that they had been robbed of by colonization.

However, in 1949, the Korean Ethnic schools were forced to close by order from the GHQ (General Headquarters, the Supreme Commander for the Allied Powers) and the Japanese government. Utoro residents fought hard to continue ethnic education for their children. They also demanded their neighboring Japanese public schools to perform Minzoku Gakkyuu (Ethnic Korean Classes) so that their children could continue learning Korean language and history after school. 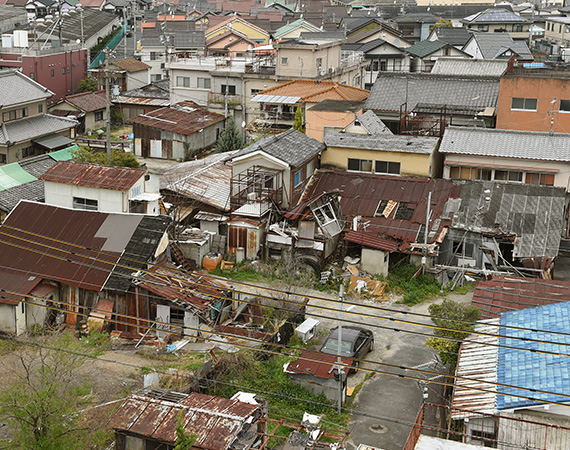 Utoro, a Symbol of Ethnic Discrimination

The influx of Korean families into Utoro continued even after the war. For Koreans who faced discrimination in employment, housing, and every aspect of their lives in Japan, Utoro served as a social “safety net” even though living conditions were harsh. It was a place for the all-Korean community with fellow country persons to help each other.

The Utoro district was despised as a Zainichi Korean “slum.” They suffered from severe flood damage during heavy rains all year long because of the poor infrastructure in the area with no water and sewage systems. Their access to daily water was so limited that many residents drew water from wells by pumping up underground water. This was needed until very recently.

After learning these facts about Utoro, Japanese citizens began to recognize it as presenting “severe human rights issues.” Together with the Utoro residents, they started a grass-roots campaign to improve living conditions of Utoro in 1986. 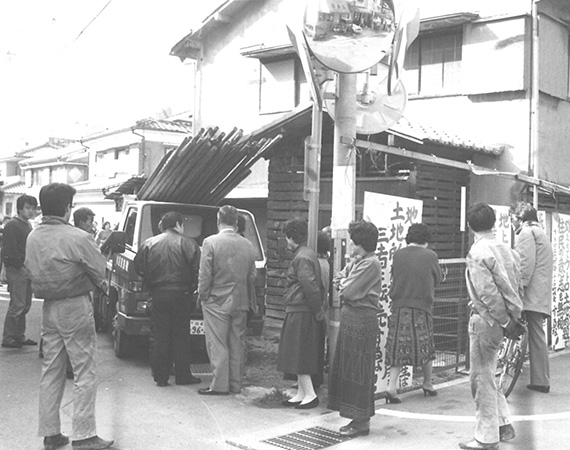 It was only for a short moment for the Utoro residents to rejoice the installation of public water system in 1988. Their fight, alongside Japanese supporters, for running water was fruitful; however, they were saddened by the news that the land of Utoro obtained, not succeeded?was sold to a land developer without informing the residents.

Nishinihon Shokusan Corporation, the developer, purchased the land of Utoro from Nissan Shatai Corporation, a former landowner of Utoro district who obtained the land from the government-controlled-corporation during the war. Residents received the eviction notices from the developer. One day, the company’s demolition crews appeared with a bulldozer and trucks at the entrance of the Utoro district to remove the residents by force. Residents blocked them and were sued by the developer. The court completely ignored the historic background of Utoro and the wartime situation that formed the Utoro community. The Utoro residents were simply blamed for “illegal occupation,” and therefore, the residents lost in all court cases.

During the whole period of these hard times, there was absolutely no help or answers from the federal or local governments in spite of the Utoro residents’ constant pleas and requests for help. 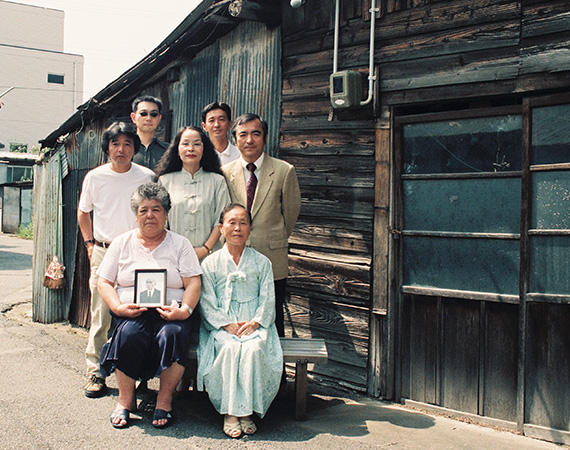 The lack of running water in Utoro drew attention from a large number of Japanese supporters who were mostly Utoro’s local neighbors. Utoro residents and Japanese supporters spent time to gain mutual understanding and decided to form a grassroots organization called, “No to Land Acquisition!! Association to Protect Utoro.” This organization, to this day, has been actively supporting the residents of Utoro.

Even when Utoro residents were in despair after losing all their court battles, the Japanese supporters proposed “Community Building Action Plan” for Utoro, and, moreover, they spread the Utoro Issue to the international community. In 2001, Utoro’s eviction problem was brought to the United Nations, and the Committee on Economic, Social and Cultural Rights demanded that the Japanese government take corrective action and warned Japan that the forced eviction violated Utoro residents’ human rights. Residents were extremely encouraged by this decision. 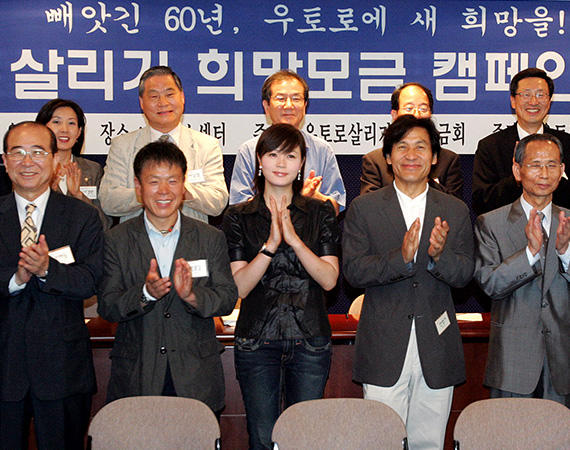 Support from Korean and Japanese civilians and the Government

When Utoro’s appeal reached South Korea in 2005, KIN, the Korean International Network, took a lead in organizing “International Solidarity to Protect Utoro” and started a large-scale fundraising campaign to purchase the Utoro land for its residents.

As a result, the South Korean Government, too, joined this campaign and gave financial support for the Utoro land issue. Then, in September 2007, residents were able to conclude the agreement to buy a part of the Utoro land from the developer company. The residents were finally free from living in fear of the forcible eviction.

Having seen the movement and campaign in South Korea, the Japanese federal government with Kyoto Prefecture and Uji City, who all had long ignored the Utoro district and its people, finally set up the “Utoro Developing Committee” at the end of 2007. It meant a new community-building project was to get started in Utoro. 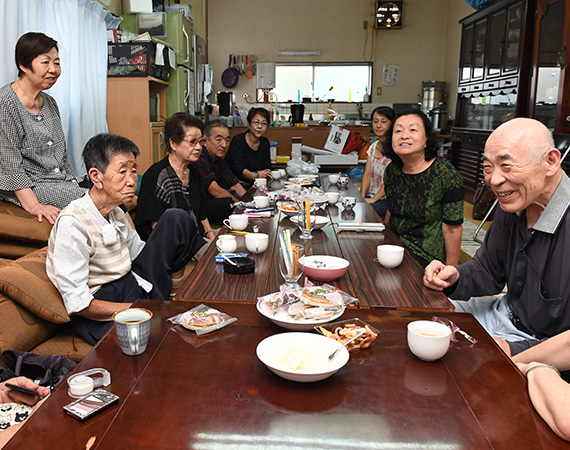 A dream to build a memorial museum to record and preserve Utoro history for future generations was presented as a concept while making “the Utoro Community Building Action Plan” in 2007. In 2018, when the first group of Utoro residents began moving into the very first unit of the newly-built City Housing in Utoro, “the Utoro Peace Memorial Building Promotion Committee” was established in Japan and South Korea. And the South Korean Government again extended financial assistance to build the Memorial Museum.

Utoro was formed during the war and was a town of ethnic Koreans “left behind” in Japanese society. However, its people, who faced such difficulties, rose to voice themselves, and they never gave up. Japanese supporters, Zainichi Koreans, citizens of South Korea, and many more stood with them to protect Utoro history and their residency rights. This proves that we, from different communities, can deepen mutual understandings and create “a small unification” to build a new society and future in solidarity.

We expect the Utoro Peace Memorial Museum to inherit the Utoro history as well as to serve as an open community base for the residents and neighboring communities of Utoro. We also hope to see young people come, meet, and interact from their diverse communities and cultures for the sake of the future of our global society.
By learning the lives of Utoro people who have protected their small ethnic Korean community at all costs since the wartime, we hope visitors will recognize the importance of human rights, peace, and the meaning of coexistence. Let us begin to create a new history together.